Blood Bike Leinster supports the event Bikers Ride Out For Prems in helping them to raise money for lifesaving equipment for hospitals with ICUs in them for premature babies. All year this group fundraise to purchase this equipment and one of these events took place on Saturday the 26th July 2014 one of these events took place. Tullamore Ride Out For Prems was a fantastic success and all proceeds will go to buy equipment.

This day was a great success and keep your eye out for future events for a great cause.
To follow "Bikers ride out for prems" progress and events why not follow the Facebook page.

Posted by Gordon at 5:55 AM No comments:

Many thanks to the 9th Lough Takeaway, Clondalkin Village for their fantastic donation to Blood Bike Leinster. Its donations like this that enable us to run our free service to the hospitals. 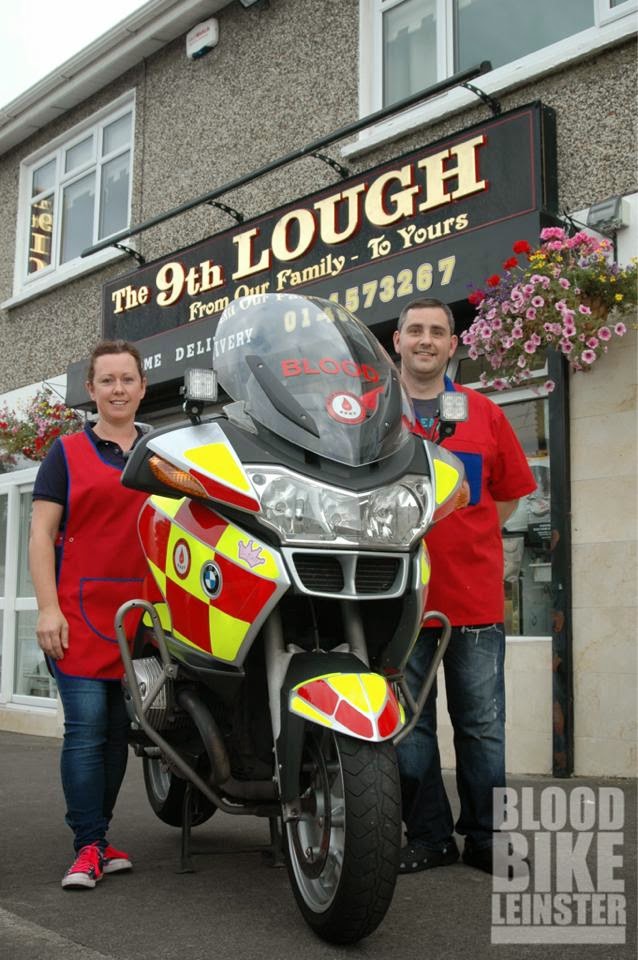 Posted by Gordon at 2:05 PM No comments:

A group of bikers have found a way to use their passion for good use with the establishment of Blood Bike Leinster, a service they offer free to medical world.
The concept of Blood Bike Leinster is very simple. The bikers, who have centres in Newbridge, Portlaoise and Navan, use their motorbikes to transport vitally needed supplies to and from clinics to hospitals.


The items can be anything from blood to scans, to samples for testing and even breast milk to maternity hospitals.
By virtue of being on powerful yet nimble motorbikes, the group can deliver the items quicker than conventional vehciles. 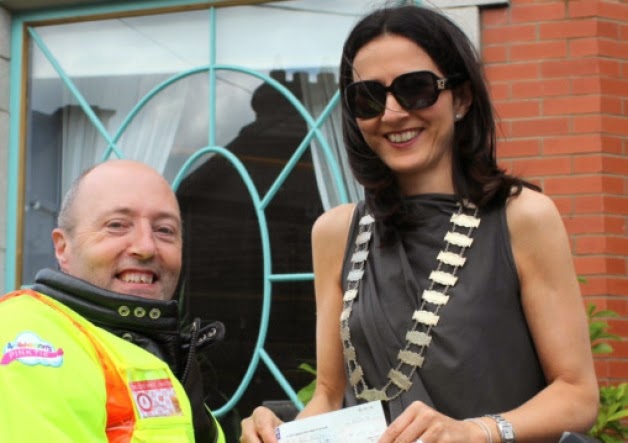 “While we don’t break the speed limts or break red lights, we have found that the motorists tend to be very accomodating, moving over to allow us to pass through,” Fergus Lennon who established the service told theLeinster Leader.
As well as being quicker, they’re also cheaper - in fact they’re free.
The group is a registered charity and bears the cost of buying the motorbikes which are ex-metropolitan police BMW’s bikes at a cost of approximately €8,000 each, insuring them, for €800 a pop per annum and fueling them - although that bit is reasonably inexpensive at €20 a week.
Servicing is donated to the group by a kind-hearted mechanic.
Fergus estimates that the cost saving to the HSE of about €12,000 since they were established, carrying out 170 runs since they were established in November of last year.
“We had to do an urgent run of breast milk from Galway to Crumlin which would have cost the hospital €600 to do.”
Blood bikes are not a new idea. They started in the UK in the 1960s and have spread to Ireland in the recent years.
“I’m a keen biker myself,” Fergus explained, “and like all bikers, I like getting out on my bike.”
The charity also work with Barretstown Camp near Ballymore Eustace and the Jockey Hospital on the Curragh, bringing samples back and forth to various hospitals regularly.
And in a poignant move, Fergus explained that one of the bikes has been named ‘Princess Leah’ after the young Robertstown girl who lost her brave battle with cancer earlier this year.
Leah’s mother, Sabrina Taaffe has donated funds to the group. The Naas Lions Club has also supported Blood Bike Leinster which hopes to expand its operations to more areas in the Leinster region.
If readers are interested in supporting them, see bloodbikeleinster.ie for details on fundraisers, or how to donate.

This article originally appeared in the web edition of Leinster Leader 2nd July 2014
http://m.leinsterleader.ie/news/local-news/blood-bike-leinster-provide-a-vital-service-1-6155312
Posted by Gordon at 8:48 AM No comments: